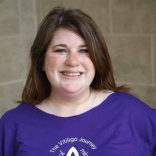 Alicia Roufs is the chapter leader of VITFriends Minnesota and…

How to Turn Your Life with Vitiligo into a Masterpiece

You’ve heard it before. You try to open up and explain why it’s hard to live with vitiligo and you hear those piercing words: “Well, it could be worse.” After all, it’s ‘just’ a skin condition.

Vitiligo is not just a skin condition, it’s an auto immune disease – my body is attacking me. Imagine waking up and looking in the mirror and seeing who you are change right before your very eyes. Imagine checking your skin every day to see if a new spot has appeared, and then agonizing when you do find a new one. Imagine praying to God that it doesn’t spread to your face – you’ll can live with it anywhere but on your face. And then when it does find its way to your face, you find yourself in the deepest despair you have ever experienced.

The lack of empathy is insulting

Trust me, we know it could be worse. We know that we could have cancer. We know we could be dying or starving or homeless. We know that there are a million things out there that could be worse than having vitiligo. But when you say, “it would be worse,” you’re hurting me more than you even know. You wouldn’t tell someone in a wheel chair, “at least you didn’t lose your arms.”  No. That would be incredibly insulting. So why would you try to minimize my skin?

Even if it could be worse, this is still our reality and our struggle

Yes, it could be worse, but it’s not. This is it. This is our struggle. We’re living in bodies that we can’t control. At all. No matter what we do, vitiligo keeps coming with a vengeance. It takes over your skin, but it also takes over your confidence, your social life and your easiness with friends and family. It takes over your happiness. And sometimes, those living with vitiligo fall down so far that they never get up.

Vitiligo is worse for some people and cultures

It’s hard to hear those words from someone who knows nothing about what it takes to live a life with vitiligo. Do you know what it’s like to be stared at? To be pointed at? To be laughed at? To be scared to go outside and be seen? To have kids not want to touch you because they are afraid they will “catch” your vitiligo?  To be called “spot” every day as a kid? No, you don’t. So until you walk a mile in my shoes, you aren’t allowed to say, “it could be worse.” 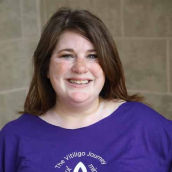 Alicia Roufs is the chapter leader of VITFriends Minnesota and has been living with vitiligo since she was 3 months old. She lives in Minnesota with her husband Dominic, son Herbie, and their dog Ronnie.

Why Advocacy Matters to The Future of Vitiligo

How to Turn Your Life with Vitiligo into a Masterpiece