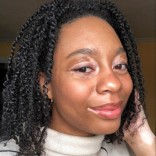 These 5 Women Have Vitiligo Hair – and Are Rocking It

Elli, a five year old cat living in Heidelberg, Germany, not only has vitiligo – but also has an influencer-worthy Instagram presence reaching just over 100k followers on the platform.

Elli and her sister, Rosie, were adopted by a woman named Nicole shortly after they were born in April 2016. The black tuxedo cats were in rough shape, having come from a run-down home and suffering from ear mites. Nicole was determined to turn their lives around – and she did.

Today, the feline duo are healthy and happy. Elli loves to play, cuddle on the couch and chase cable ties around the house. According to Nicole, she also has a mischievous side to her as well, often scarring and annoying her sister Roise for fun.

Just a year after adopting the cats, Nicole noticed that spots of Elli’s black fur were turning white, while Rosie’s black coat remained the same.

As the patches spread, Nicole began to wonder if Elli was like Scrappy, another cat with vitiligo she’d seen online. A vet confirmed the theory. A suggestion from a friend sparked the idea to create an Instagram account for Elli – and the rest was history.

Today, Elli has a thriving Instagram page with hundreds of pictures, and well over one hundred thousand followers.

“We didn’t think the account would grow so fast,” said Nicole, who was surprised to see the love that Elli has gotten on the internet. “Becoming ‘famous’ wasn’t our intention.”

Yet, Elli has become just that. Today, Elli is one of several famous animals with vitiligo, joining Scrappy the cat and White Eyed Rowdy, the dog who was featured in the Huffington Post a few years ago after a boy with vitiligo flew from Arkansas to Oregon to meet him. Fanny, a basset hound from Germany whose photo has been shared to the nearly 2 million followers of the popular We Rate Dogs Instagram page, has also gained popularity for her white spots, although the condition is unconfirmed.

Nicole started the Elli’s Instagram account with a post showing the cat’s black tuxedo coat pre-vitiligo. Since then, she’s continued posting pictures to show the progression of vitiligo in Elli’s coat. Today, Elli looks more like a white cat with dark spots – but that hasn’t changed anything to her owner.

“We wanted to show that vitiligo can be something fantastic that makes someone unique,” said Nicole about starting the account for Elli. “I love her every way she is and will become.” 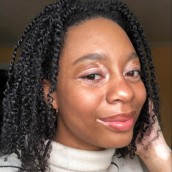 What You Need to Know About JAK Inhibitors, an Emerging Vitiligo Treatment

5 UPF Clothing Brands to Protect Your Skin from the Sun

Why You Need to Wear Sunscreen If You Have Vitiligo

Why Vitiligo Vanquish Is My Go-To Camouflage for Covering Vitiligo

These 5 Women Have Vitiligo Hair – and Are Rocking It