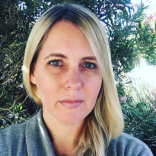 Sara is vitiligo mom and patient providing support, community and…

Meet the Entrepreneur Behind Litty Ligo, a Vitiligo Support Network

This year I became a vitiligo mom and a vitiligo patient. My son and I were both diagnosed with vitiligo this spring.

On Thursday of our school’s spring break in March, my ten-year-old son Titus woke up with white patches on his face that seemingly appeared overnight – a milk mustache on his upper lip and three pea-sized white freckles on the right side of his nose.

Immediately I was certain that is what it was. I Googled “vitiligo” naively hoping it would be a quick trip to the dermatologist, a topical cream perhaps, and that would be the end of that.

Instead, I was blindsided by black and white pictures of vitiligo patients, their eyes blacked out as though vitiligo is a shameful secret, accompanied by medical articles including at least one of these terrifying phrases: no cure; disfiguring; extreme mental distress, particularly for young teens. Did I mention we are a year out from that hellish season of life known as middle school?

I felt myself sinking. The future I’d imagined for my child came tumbling down on top of me, and I began to panic, barely able to breathe.

For days while waiting for our dermatology appointment, I couldn’t eat or sleep. My hair began falling out. I spent every free moment reading about vitiligo.

I have had seven miscarriages, so this is not my first time to dread a phone call or diagnosis from a doctor’s office. I am well-practiced in pulling my emotions together and not entertaining fear until we have the facts.

However, I consciously chose to let myself fully experience all my emotions before the official diagnosis, because I knew once we saw a doctor, my son would be involved. I would want to be calm, strong, and confident for him.

Monday, April 2, 2018, our lives changed forever. Our dermatologist examined Titus and with a simple nod confirmed that he has vitiligo.

As I learned about vitiligo this spring, I also decided to see the dermatologist.

I’ve had some depigmented skin for many years, but not all depigmented skin is vitiligo. I assumed mine was not. I was the right age for the white freckling on my arms to be an alternative diagnosis to vitiligo – idiopathic guttate hypo melanosis – harmless white spots, like depigmented sun spots, that appear with age.

However, since my son has vitiligo, and vitiligo has a genetic component to it, I decided to get an official diagnosis.

“I honestly don’t know,” said my dermatologist after inspecting my arms. “Only time will tell. If the spots begin to grow, we can begin treatment. However, I see you are losing pigment below your eyebrow and above your upper lip. That is certainly vitiligo.”

I knew about my brow, but I assumed it was from years of plucking my eyebrows. However, I did not know about my mouth.

I am very pale-skinned, so I honestly do not know how long my upper lip has been losing pigment, but if I had to guess, I do think it is very recent because every day the patch is getting a little bigger, a little whiter, a little more noticeable.

When my son was first diagnosed, I would pray these desperate prayers: “Please let us find just one other person who has visible vitiligo too, so he doesn’t grow up feeling alone.”

After my diagnosis, I had to laugh. I didn’t mean me!

However, even after only two weeks in, I would not change this. Going through vitiligo together will certainly help inform the choices I make as a parent. Now as a patient, I already look at some of the early decisions I made as a parent of a vitiligo patient, and I see how I might have been a little gentler and more thoughtful in my approach.

Also, going through my own patient experience as a vitiligo parent has forced me to keep myself together and immediately start asking how I can make good from my own situation. I hope that if my child sees me choosing positivity for myself, maybe it will be easier for him to have the courage to do the same.

Have you been recently diagnosed? What was your experience? 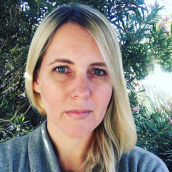 Sara is vitiligo mom and patient providing support, community and awareness for vitiligo in Phoenix, Arizona. She and her son, Titus, were diagnosed in the spring of 2018. Find her on Instagram at @vitiligofamily.

The Problem with Celebrating Vitiligo (as Something Beautiful)

Meet the Entrepreneur Behind Litty Ligo, a Vitiligo Support Network